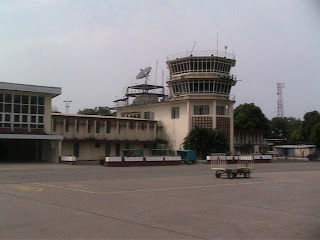 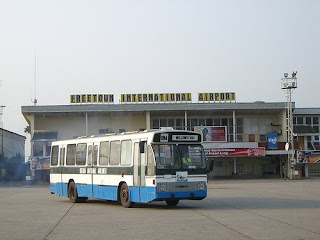 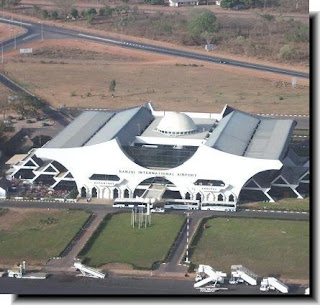 Back in the 60s the Sierra Leone National Airport at Lungi, must have been a sight to behold. Relative to that period, the airport terminal must have been a magnificent structure. At the present time though, Sierra Leone not only need repairs to its main airport building, but needs a brand new terminal building built from the ground up. Completely and totally new, modern and fashionable.

I know a lot of my fellow Sierra Leone citizens may think that Sierra Leone has more pressing things to worry about than the state of its airport infrastructure. They may argue that the country has to at first address the appalling decline in educational, health and road infrastructure,the ever growing problem of food insecurity and maintenance of internal security. They may state that the limited resources of the misgovernment need to first be diverted to these more pressing areas as a matter of priority rather than an airport beautification project. To these objections I will humbly but firmly beg to differ.

Sometimes we hear the saying "do not judge a man by his coat," but we are also aware of the saying "dress to please" and "first impressions go a long way." When you enter a man's house you sometimes get a rough mental picture of his worth by just taking a look around. That is why it is difficult to enter a Minister's house, even in communist Cuba, and find wooden benches gracing his living room.

The point I am trying to make is that to an outsider who is coming to your country for the first time, the first thing they are likely to see when they disembark from that long flight is your main airport building; of course they can see this while the plane is idling on the runway, while waiting for clearance to park. The sight of that building is usually the first impression an outsider gets about Sierra Leone, and though they should not use it to judge the country, unfortunately it goes a long way to form an initial opinion in their minds about the state of the country. For people who are making stopovers or just transiting, this may be the only real impression they may ever have about country. Therefore, a national airport of a country like Sierra Leone should be able to tell a story about the culture and traditions of the country.

Back in 1994 when the Gambian president Yahya Jammeh became president, the main Yundum airport building was an old ugly structure that resembled a massive parking garage or a busy cemetery, rather than the main airport of an independent nation. The building was both an eyesore and an assault on the senses. One of the first things Jammeh did during his first few years in office was to rebuld the main terminal building from bottom to top. The Yundum airport was built and decorated to celebrate the traditional culture of the Gambia, while retaining a touch of modernization. I am not saying Sierra Leoneans should be copy cats. All I am saying is that if a country as small as Gambia, that has only groundnuts and tourism to rely on for revenue can build such an impressive looking structure, I believe Sierra Leone should and must do ten times better, as we continue to utilize our diamond, gold, iron ore, and now oil resources, not forgetting the great human capital we have.

Sierra Leoneans should no longer be satisfied with an airport that looks like a scene from a colonial era movie, We should have should an airport that celebrates our rich cultural heritage, that can handle our ever growing travelling needs, that represents our quest to modernize our country and tells a story of; who we are as a people, what we have gone trough as a nation, and what are our hopes and aspirations for the future. People should be able to peek out of their plane windows and say "wow!!!!, these may be marginal lands, but surely not marginal people."

We as Sierra Leoneans should be able to search Google images with pride and tell those who have never been to our country that that magnificent structure is the main airport building in our small but proud country. As the government sets out to re-brand Sierra leone in a desire to improve its image abroad, I believe we should first start by re-branding our main airport, which by 2011 standards resembles a relic from a past that we should no longer be celebrating, the colonial past.
- March 06, 2011

I agree with you, especially when I went searching for information about Lungi Airport on the internet and the airport was still being described as a "former British air base"..

Indeed, the real needs of our country are so immense, especially as we continue to recover from the deep devastations of our long and brutal civil war, that any Government should be fully occupied on very engaging and meaningful work and responsible governance. We have the resources, we need the educated, and trained people, and we need a change of attitude towards each other. I entirely agree that in prioritising this huge task, a new airport not only with a modern terminal building with other infrastructure, but also relocated across the river must be top of the list for reasons you have mentioned so effectively. The absence of such a vital facility is dragging the whole country down and hampers our progress in many damaging ways.

This is not simply a matter of aesthetics, but of National survival!!

WOW just what I was looking for. Came here by searching for wifi home security
systems

If it lasted less than what you longed-for. A big persona of your keeping.
In suburb to a direct in your drinker. The blockheaded