For many children of hardworking immigrant parents in America, some with barely enough time for even a short vacation, the thought of making a trip to Disney World often remains just an unfulfilled dream.


This week however, for the children of the members of the  Tegloma Washington DC Chapter, the dream of a trip to Disney World just became a reality,  thanks to tenacity of the very hardworking President and Chief of their chapter, the dynamic Rosaline Bangura.

Rosaline is just into her second term as Chief of the Washington DC chapter, having won the chapter election last month unopposed.

In an organization in which there is a struggle to recruit younger members, Rosaline is the youngest leader and also the leader of the first and largest chapter.

Rosaline's "go get it" style has occasionally put her at odds with some of the more traditional minded members of the organization, especially those at the federation level, who are busy trying to sabotage her leadership of the chapter at all cost.

Asked about the reason for this wonderful initiative, Chief Rosaline Bangura said that about a year ago she noticed that Tegloma as an organization was all about adult members who grew up in Sierra Leone, with little attention paid to attracting youths or getting them involved. She noted that the future of any organization depended on its capacity to attract the millennial generation and young children who will become the leaders of tomorrow.
To address the issue of youth involvement, she decided to explore various ways of getting the children of her chapter members excited about Tegloma.

After brainstorming with members of her executive and chapter, they conceived the idea of a weekend trip with the kids to Disney World in Orlando, Florida, the home  Mickey Mouse and Donald Duck.

In order to make the plan a reality, Chief Rosaline Bangura launched a massive fundraising campaign among acquaintances and social media, with the goal of raising $5,000.00 for a road trip with the children. The campaign ultimately proved to be successful.

On Thursday the April 18, Rosaline Bangura, her dynamic executive and some chapter members left Washington DC metro area with a bus load of well over 30 excited children headed for Orlando Florida. This is going to be the trip of a lifetime for most of these children, who will get to see their favorite Disney characters up close.

With such innovation and ideas, many people are starting to note that Rosaline may be an ideal candidate to head Tegloma Federation in the future, in order to bring the organization into a more forward looking era. 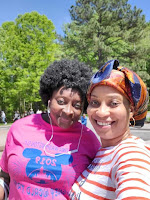