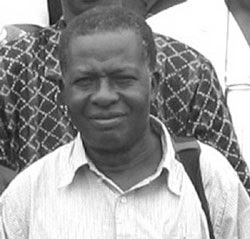 When rebel forces overran the town of Kenema in the Eastern Province of Sierra Leone, in February 1997 and then later in 1999, the government buildings were looted and burnt, and most of the government workers fled before them. One exception was the small outlying building beside Kenema Government Hospital. This is the Lassa fever isolation ward - the only such specialist ward in the world, presided over since 1991 by Dr Aniru Conteh.

The notoriety of this killer disease ensured the ward's safety. The modesty of the building - its cement floors are easy to sluice down, wide windows allow fresh air to circulate; a small shelter has been built close by for the families of patients - belies the international significance of the work carried out by Conteh's team, who pursue their task in ever-present danger of the disease they treat.

With the diamond mines of Tongo to the north attracting migrant workers from across Africa, and waves of rebels and refugees crossing and re-crossing the eastern border with Liberia, stability has eluded Kenema for much of the last decade. Moreover houses left derelict by the civil war in Sierra Leone have created ideal breeding ground for the multimammate rat, which spreads the disease in its urine. Food shortages have at times led people to trap the rats for food, leading to further outbreaks.

Aniru Conteh spent most of his professional life combating Lassa fever. It required great courage, discipline and creativity to run such an isolation ward with severely tight resources amidst such instability. He showed countless medical staff both from abroad and in Sierra Leone what can be done in the face of hazards and obstacles, and how patients could be given the best possible chance, and how risks to their carers could be minimised.

Lassa fever is similar to Ebola fever. Difficult to treat, with no reliable diagnostic test readily available, highly infectious and with no reliable therapy or vaccine in prospect, it starts with a high fever that within seven days can lead to massive haemorrhaging, convulsions and often death. It takes its name from a village in Nigeria where an outbreak of a mysterious fever in a mission hospital in 1969 led to the three mission nurses' becoming infected. Two died, but the third survived to be evacuated to America where the virus was isolated at Yale University.

Following a new outbreak of Lassa fever in the Catholic Missionary Hospital in Panguma, Sierra Leone, in 1976, the American Joe McCormick, head of a team from the Center for Disease Control in Atlanta, set up a research programme in Segbwema, Kenema and Panguma. It was in Segbwema in 1979 that Conteh joined the CDC team.

Aniru Conteh was born up in Jawi Folu, a tiny village near Daru in south-east Sierra Leone. His father was a farmer and village chief. When Aniru was 16 his mother died and he ran away from the local school to Freetown to fend for the family. From school in Freetown he went on to study chemistry and biology at Fourah Bay Colleges in Freetown, taking a Durham University BSc, and initially became a teacher. In 1968, however, he enrolled as a medical student at the University of Ibadan, Nigeria, qualifying in 1974, and working for four years at Ibadan Teaching Hospital.

In 1979 he took up a post at the Nixon Methodist Hospital in Segbwema, becoming Medical Superintendent the following year, and with the outbreak of civil war in Sierra Leone in 1991 the Lassa team, still with Conteh as its director, moved to Kenema.

Conteh was instrumental in 1996 in assisting Merlin, the London-based medical-relief organisation, to establish a programme in Sierra Leone, which included support for the Lassa isolation ward and Lassa fever control programme in the region. Throughout the 10 years of war and the period of reconciliation that has followed it he remained at his post treating thousands of cases and saving many lives. His skill in diagnosis and treatment was unparalleled, and resulted in a reduction in mortality of suspected Lassa fever cases to around 20 per cent.

Three years ago Conteh came to Britain to present a paper on the management of Lassa fever to an international conference on the disease hosted by the Central Public Health Laboratory in Colindale. Last year he was again in London to mark Merlin's 10th anniversary and to receive the "Spirit of Merlin" award for his international contribution to the core mission of Merlin "to save lives and alleviate suffering". He was an icon to Merlin's 1,400 relief workers worldwide.

Many of those who worked with him went on to become leaders in the field of public health and infectious-disease research. Dr Abdul Rahman Wurie, World Health Organisation Disease Prevention and Control Adviser in Sierra Leone, saw the possibility of building on the expertise of Conteh and his team to create a West African Regional Centre for the treatment, control, training, emergency preparedness and research into Lassa fever and, potentially, other haemorrhagic fevers - a project awaiting realisation.

Despite the insecurity, the lack of resources and opportunities to work internationally, Aniru Conteh remained in Kenema ministering to those who needed his skills the most urgently. On 17 March, while treating a patient, he accidentally pricked himself with a needle and became infected. He died 18 days later.

He was a true hero!! Thank you for posting this.