US concerned about Situation in Libya 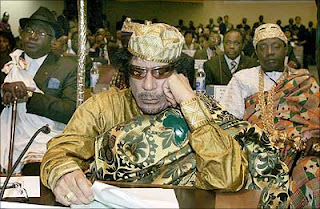 February 20, 2011
U.S. ‘Gravely Concerned’ Over Violence in Libya
By ERIC SCHMITT
WASHINGTON — The Obama administration on Sunday condemned Libya’s use of lethal force against peaceful demonstrators, pointing to what it said were “multiple credible” reports that “hundreds of people” had been killed and injured in several days of unrest.

In the administration’s strongest statement on the escalating violence in Libya, the State Department said that it was “gravely concerned” about the reports and that the number of deaths was unknown because of a lack of access to many parts of the country by news organizations and human rights groups.

Philip J. Crowley, the State Department spokesman, said that the United States has raised “strong objections about the use of lethal force” with several senior Libyan officials, including Musa Kusa, the foreign minister.

“Libyan officials have stated their commitment to protecting and safeguarding the right of peaceful protest,” Mr. Crowley said in a statement. “We call upon the Libyan government to uphold that commitment and hold accountable any security officer who does not act in accordance with that commitment.”

The impact of the administration’s sharp criticism of Libya’s firing on demonstrators was unclear, and stood in contrast to how President Obama’s strong criticism of the use of force by security forces in Bahrain appeared to have pressured its government to withdraw police officers and troops from the main square of that country’s capital, Manama.

Administration officials said Sunday that the tough line with Bahrain, home of the United States Navy’s Fifth Fleet and the center of American efforts to contain Iran, had been effective. “We’ve been very clear with our partners in Bahrain that they ought to exercise restraint, that there is no place for violence against peaceful protesters there or anywhere else, and we’ve condemned that violence,” Susan E. Rice, the American ambassador to the United Nations, said on “Meet the Press” on NBC.

As it did with Iran and Egypt, the administration has responded in different ways to the embattled governments in Libya and Bahrain. “Each of these countries is different,” Ms. Rice said. “Each of these circumstances will be decided by the people of those countries. We are not pushing people out or dictating that they stay.

“What we’re doing is saying, consistently across the board they are universal human rights that need to be respected.”

Senator Lindsey Graham, an influential Republican from South Carolina, offered support on Sunday for the administration’s dual approaches. “We should have a policy of urging old friends to do better and replacing old enemies,” Mr. Graham said on “Meet the Press.”

Meanwhile, Adm. Mike Mullen, the chairman of the Joint Chiefs of Staff, arrived in Saudi Arabia on Sunday for a previously scheduled weeklong trip to the Persian Gulf region. His scheduled stops also include Kuwait, the United Arab Emirates, Qatar and, possibly, Bahrain.

Capt. John Kirby, his spokesman, said in a statement that Admiral Mullen would meet with his counterparts in each country and would “make clear his desire to see that peaceful protest be allowed to continue without threats or violence from any quarter and that restraint is shown by all sides in these disputes.”

Middle East security experts say the United States has greater influence over allies like Bahrain than countries with which relations are more strained, including Libya, even though full diplomatic ties were restored in 2009.

In Bahrain’s case, the administration is also balancing the interests of Saudi Arabia, another monarchy, which is connected to Bahrain by a causeway. Senior Saudi officials have expressed displeasure that Mr. Obama has allowed the protests to continue, and even grow, by espousing political and economic reforms in the region.

Throughout the region, Ms. Rice said, “there are conditions that are inherently unstable — a youth bulge, high unemployment, a lack of political openness — and we have pressed publicly and privately for the kind of change that is necessary.”

Senator Richard G. Lugar of Indiana, the ranking Republican on the Foreign Relations Committee, said that in most of those countries, an aging autocratic leadership was confronting the realities of a youthful population eager for social and economic changes and connected by social networks that were not broadly in use even a few years ago.

“They know they are not getting their fair share, that life is not going to be good for them,” Mr. Lugar said Sunday on “State of the Union” on CNN. “As a result, given hunger problems, other economic difficulties, they have come to the fore.”

Mr. Lugar continued, “The question is, will, as in the case of the Libyans, the protesters simply be shot?”
- February 20, 2011