Christmas 2015: A Salone Man in Minnesota 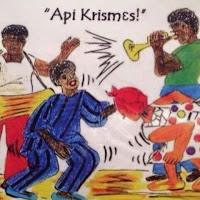 Today I woke up to snow on my doorsteps. Sometime during the night, the snow had come like an unwelcome stranger and dumped four inches of fluffy stuff in our backyard. If we had listened to the forecast, we would have gone to bed expecting the snow. Unfortunately, yesterday we came across an old Sam Fan Thomas Album on YouTube, "African Typic Collection" and it was all that we listened to. Sam Fan Thomas, Youssou N'dour, Oliver Ngoma and S.E Rogie. Those four can make even a drab Christmas feel great.

This morning, I dragged my boots through the slippery snow, came out of the driveway and looked out down the street, marvelling at the uniformity of the whiteness, feeling sorry for the struggling drivers who would always find an excuse to postpone that tire change until the first major snow fall. Snow and smooth tires engage in a  type of dance that no driver wants to get in.The snow always wins. Always.

I can guarantee that this morning, the folks at Discount Tires will have a brisk business. That's just the way life is. One man's inconvenience is another man's gain. If a mortician tells you business is slow, it simply means people are not dying quickly enough. 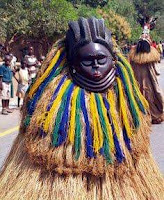 Sierra Leone and Minnesota on Christmas day are like two planets in different universes. Minnesota Christmas is white, windy and cold, with survival aided by mashed potatoes, green beans, turkey and gravy. On the cold Christmas night the police are always on patrol, to make your Christmas just a little bit more exciting if you had too much to drink.
Christmas in Sierra Leone is almost always sunny and dry. And oh, the food. Potato leaves, cassava leaves, that ubiquitous jollof rice. Not forgetting the Christmas three; Star Beer,  Heineken and Guinness. If you can't get these don't worry,  there is alway the reliable two, "Poyo" and "Omolay."
In Sierra Leone, most Christmases, we just celebrate being alive.
"Happy Christmas we nor die yo"
"Happy Christmas we nor die yo"
"Tell God tenki for we life oh"
"Tell God tenki for we life oh"

This 2015 Christmas in Sierra Leone, all the thanks to God for being alive are genuine. After the year long terrible Ebola virus scare that killed thousands, anybody who survived that terrible plague definitely has a reason to be thankful. This year there is truly a reason to tell "God tenki for we life oh." 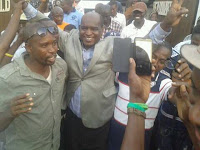 My Bo School mate Allie Kabba, an aspiring Sierra Leone national politician was arrested on Christmas eve. In Sierra Leone popular people are not arrested.  We make it sound more civilized, more acceptable. He was invited to CID for questioning. Unfortunately he had to sleep overnight to complete the interview.
Allie Kabba has for long been one of the heroes of the injustice that has always been part of the history of Sierra Leone. Every generation has their heroes. Allie is a hero of this generation. Unfortunately Allie got involved in some complex bedroom politics. In Sierra Leone the dichotomy between national and bedroom politics is usually opaque. You just have to be careful whose bed you hop in. But as they say, you can't keep a good man down. 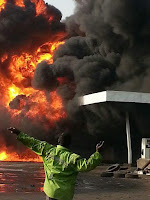 Christmas day in Freetown was horrible  for people living by the Safecon Gas Station at the popular Shell Company. Loud explosions rocked the quiet morning as fire ripped through the station creating an inferno, seen for miles,  that the local fire force was unable to tackle. They did their best with what they had. But unfortunately people could just watch as nature worked its damage. At the end, millions of Leones worth of damage and many severe injuries were left in its wake.

Sierra Leoneans are a tough people. War, poverty, disease, we've this had our fair share but each new year, we hope that thinhs will get better. This 2016 things may just get better. It is all that we can hope for.
- December 26, 2015