I just finished listening to a phone interview of the Local Unit Commander of Kabala, one Inspector Almamy Bangura, conducted by Mustapha Wai of the popular Sierra Leone focused, US based, Mamba TV Network. Kabala is a town in Sierra Leone where police recently opened fire on a group of young protestors killing and wounding some and arresting many more.

Listening to the police inspector gave me the sinking feeling that probably many of the leaders of the modern Sierra Leone police force have very little understanding of  what democratic expression and human rights truly means. I have no idea what the curriculum of the Sierra Leone police training school teaches, but the Kabala Inspector's interview definitely points to the fact that many police in the country simply do not understand the role the police force is supposed to play in a multiparty democracy.
Historically, the Sierra Leone police grew to maturity under the country's dictatorial one party and military regimes.  In those days,  the primary role of the police was to keep the people strictly in line with the dictates and decrees of the dictators, using violence, ever where it was not warranted.


Unfortunately, even with the reintroduction of multiparty democracy in 1996, it seems as if the police are still playing by the old play book. They shoot to kill at the slightest provocation.

The late President Kabba made reformation of the police a major part of his governance agenda, even bringing a veteran expatriate police officer from Europe to head the force in a bid to change the culture. With Kabba gone and the old school back in charge of the police force, the old tricks have resurfaced again; harassing drivers for tips, prosecuting those who challenge the powers that be, intimidating the political opponents of the government, public intoxication and quelling public dissent.

For the past several years, nearly every public protest in the country has been met with deadly force, except where the protest has been in favor of the government. In Bumbuna, Kono, Freetown and other places, the police has not hesitated to turn their guns on civilians at even the slightest act of civil disobedience.

The killings this week of youths protesting the rumored relocation of a project from the remote district of Koinadugu to the more affluent Tonkolili District, represents one of the most senseless police killings I have read about anywhere in the world.

Hearing the Inspector describing the incident truly made me so angry. All I thought was how could such a complete moron could be put in charge of the police force of this major provincial headquarters town. The fact that the police force had such an unimaginative individual as leader in such a place was a true recipe for disaster. He couldn't even be honest.

The Inspector's interview is probably an urgent cry that the Sierra Leone police needs to invest heavily in sending their top officers for training in democracy and rule of law and not just focus on training in the maintenance of law and order.

Just as the senior members of the military frequently go for professional training, the Sierra Leone police badly needs such opportunities.

To the scenario in Kabala. Local youths went to the police asking for permission to protest the relocation of a proposed youth project from Kabala to Tonkolili. However, the simple fact that youths truly bent on violence do not go and ask for permission did not register to the Inspector,  nor the fact that the youths were just making an indirect appeal to the President.

So what did the inspector do? The only word he understood from the appeal was "demonstration" and he immediately turned them down.

Instead of giving the protesters guidelines and providing police protection to ensure that the protests were peaceful, he turned down the protests, immediately adopting an adversarial posture. Even when he knew that the rumored project was truly important to the youths of the large rural town with few attractions, he turned them down simply because he had the authority to do so. When the youths decided to protest anyway, he decided that they were doing so against the law and sent his men to gun down very young boys in the streets. His reasoning was that his refusal was law and as they had disobeyed him, they had disobeyed the law. Therefore, they needed to die. In Sierra Leone, he will of course go free.

One of the boys reportedly killed, Borboh Savage, was described as a very promising boy with an avid interest in science. One of his acquaintances lamented that such a valuable life was cut short so tragically by unwarranted police brutality.

I do not want to lecture the Sierra Leone police on the role of protests in a democracy, as they are supposed to know this and probably know about it more that I do.

But I will point out this to the public.
Just as voting is integral to democracy, so are protests by those who have no direct access to the people who shape public policy. Not all protest is violent, sometimes it is just the voice of the weak and powerless calling the attention of those in power. In this case they had asked for permission and were refused. Protesting is no reason to be killed for. It is no reason to die. It is no reason to end the ambitions of very young men. It is no reason to take a valuable life.

The murder of poor defenseless civilians by Sierra Leone's increasingly trigger happy police is becoming a frequent occurrence and truly needs to stop. No society will progress where there is such a blatant disregard for human life. Protests are a vital form of democratic expression and as long as their intent is peaceful, they should be allowed, supervised.

The policing scenario in Sierra Leone is very troubling. Political interference with the police is extensive. Instead of police following the dictates of their profession,  they receive "orders from above." Ministers who have no idea what the role of the police is will sit in their offices, call an Inspector and demand the arrest of a law abiding citizen. Even though the constitution of Sierra Leone gives the minister and police no such authority to effect such an arrest, few police officers in the country would resist an "order from above." It could mean the loss of rank, station or even job. Such is the political interference in a force that is supposed to be professional. Politicians have to clear protests before they go ahead and today most protests are not given permission to proceed.

So where a cause is important to the common people, refusing their right to  protest is usually a catalyst that helps create the scenario for the violence witnessed in Kabala.
The Sierra Leone police needs urgent reform.
- August 20, 2016 No comments: Links to this post

A Voice of Hope Goes Out in Sierra Leone

One of the most prominent of the next generation of leaders in Sierra Leone, Moseray Gabril Fadika, a young successful business man and one of the new crop of ruling All Peoples Party (APC) politicians passed away suddenly in the United Kingdom yesterday, while on a European tour popularizing his bid to become the flagbearer of the ruling APC party in the 2018 Presidential elections.
Moseray Fadika had overnight become a political sensation in Sierra Leone, especially among youthful APC supporters. His populist campaign, with a political platform based on the elimination of poverty, resonated particularly well in a country where 80% of the citizens live in abject poverty. He is one of the few politicians in Sierra Leone to have cross party appeal.

Moseray's personal doctrine was, "We are born poor, but we must not die poor." He himself symbolized  the doctrine. He and his brothers rose from humble origins to become some of the most prominent political and business leaders in Sierra Leone.

Moseray came to prominence when after packing his bags and returning home after a spell in the diaspora, he was appointed as the Executive Chairman and Director the Sierra Leone arm of African Minerals. He engaged in many business ventures and was a cofounder Pan African Minerals Ltd. (PAM) and African Petroleum Company Limited.

Moseray was also engaged in charity ventures and founded All Works of Life (AWOL) a philanthropic venture that was reportedly engaged in a variety of small scale income development projects. Many describe him as a man with a deep feeling for the poor and their struggles.

In a deeply polarized country however, many Sierra Leoneans are divided about Moseray's legacy, particularly his acquisition of so much wealth in such a short period. Some see his rise as emblematic of the profound corruption and inequitable distribution of wealth in the country. In Sierra Leone, those close to power have most of the wealth creation opportunities in the country, while the poor and ambitious do not even have access to bank loans to engage in large scale business. In a country in which access to bank loans for major investments are limited only to the rich or those with political connections, many of the country's citizens who do not have such access are trapped in a vicious cycle of poverty exacerbated by a financial system that discriminates against them. 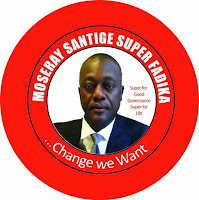 Moseray's supporters point to his meteoric rise as an example that anybody with ambition and drive will find a way to build a brighter future. They see him as a lucky man and a philanthropist.

Ironically, in a media interview Moseray gave upon launching his campain for the Presidency, he made a statement that seems particularly ominous now, given the events of the past few days. Commenting on his campaign to eradicate poverty in Sierra Leone, Moseray stated that the main reason why he was running was to see every Sierra Leonean be free of the cycle of poverty and low expectations that was endemic in the country. He said that he was running to ensure that every Sierra Leone has the chance to find a way to better him or herself. He said that if he was unable to do this when he became President, then God should put him as far away from the presidency as possible. With his demise, some on social media are now wondering whether these words did not come back to haunt the business man turned aspiring politician.

The details surrounding Moseray's demise are not yet very clear, but video clips from a public event held immediately before his demise show one of his supporters stating that his health had not been good for a day or two, and he even struggled to talk,sounding hoarse, with a raspy voice.
Some weeks ago, it was reported that Moseray was manhandled by some of his political adversaries in Mile 91, a small town in Sierra Leone and he had to be rushed for medical treatment. The report was however quickly denied. But recently he had looked somehow pale and gaunt.
Moseray is not the first young APC populist to die suddenly while chasing the highest office in the land. In the early 90s, another young business man one Paul Kamara who lived in Goderich achieved much fame during the period just before military rule. He was intending to become a running mate to Joseph Saidu Momoh, but he died suddenly in similar circumstances.

Moseray's death is a major loss to his country, his supporters and particularly his young family. He grew up in Freetown and attended the popular St. Edwards Secondary School. He will be missed.
- August 08, 2016 No comments: Links to this post

Debit vs Credit Cards: Which is Better to Use?

A debit card is issued by your financial institution, allowing you to make charges against your deposit. If you have a thousand dollars...